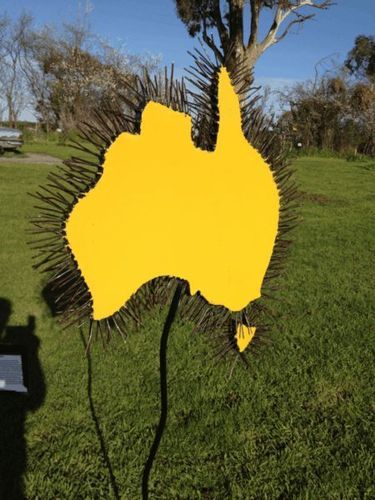 Again we have this fuss over boat people and refugees. I am of the opinion that we should be working to help solve the problems first of all at the source, secondly in the camps and thirdly welcoming most of these people in some way or another.I hate the rhetoric of� turn back the boats� and the idea of indefinite detention for desperate people seems inhuman and of benefit to no one. My Australochidna is my perception of how many people think. I was going to put little characters skewered on the spikes but the actual appearance I feel is neat enough to look good and I think the message is clear enough. I also like the Australochidna as suggesting a real echidna which when it feels worried, buries itself in the sand and wont �talk� to anyone.