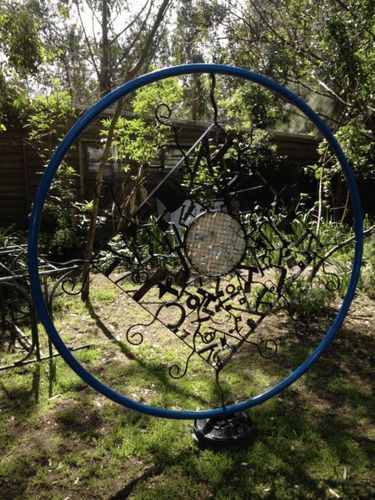 I spoke at an “inner wheel “ club recently and it is part of the Rotary organization… This doesn’t really refer to that but the name seems to have stuck.
This is based on the form I found as described in “Core” but here I have explored it in a slightly different way. I have kept the extensions in the curled form and added junk around the core of rock. Similar to core.. it has an inner “wheel” which is the center of our individual world .. we deal with the junk of life forming paths through the debris and clutter and reach a point where we can really grow . Child hood, adolescence and adulthood…and to a degree the great beyond!I recycled it in 2013 by adding the outer circle and this adds immensely to the form.