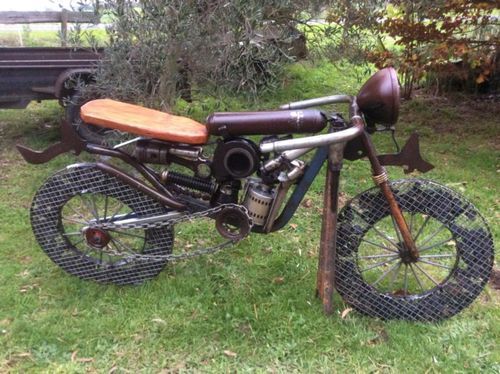 I have never ridden a motorbike. I was listening the other day to a man describing the adrenaline rush of being on a bike and really, I am not much of an adrenaline junkie. I used to ride a bike and that was fun and useful. I am often influenced by the pieces that magically appear in my pile and one day a lot of this collection appeared. It seemed to suggest a motorbike and I thought I would just knock that job over quickly. Nearly a month later ( not as quickly as I anticipated)  it was finished and I am delighted with the range of oddities in it .I suspect this is the closest I will get to a real motorbike… and that is fine too.