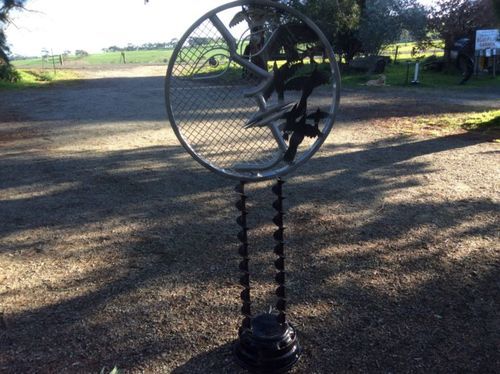 I seem to like girls.. and birds. I think I have contrasted the two worlds ( human and natural quite nicely). I was exploring using tube to create a profile face and also use mesh to make shading, sort of like cross hatching. I had a trial circle in the pile and the face form fitted neatly. I wanted something to contrast to the openness of the face and birds almost always come to mind so I did them in Corten so the would go brown. We all long to fly, and maybe be part of a flock, but size and biology is mostly against us.That does not stop us longing and admiring.

Another piece that started from trying to recycle a circle made for me. I had the idea of the face and it fitted in nicely although it needed some solidity in the form of the mesh. It then looked like the man in the moon and good but still unfinished. Birds it was.. and they are corten birds so they will be brown silhouettes compared wit the silver of the rest. It sort of titled itself…. And apparently there actually are things called moonbirds.