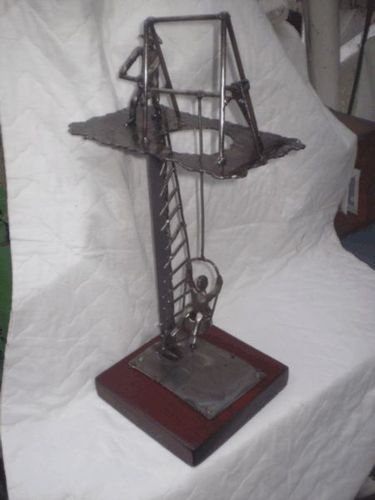 This was for the biblio art show at Blarney books Pt Fairy. I had the book( �These are my people��. Alan Marshall)
My Mum met Alan Marshall too�She described feeling miserable and coming into a corner shop complaining to the owner of how miserable her life was. Alan was sitting quietly at a stool and said something like� appreciate what you have� some have it worse than you�.Mum turned around to tell him off and then noticed the crutches and dangling legs, thought again and apologised for her self centeredness.
In this story Alan describes how he and his wife go on a caravan journey through out Victoria to collect letters from people on the land to send off to the soldiers serving overseas during the second World War.
This is the second sculpture I have made based on this story. In the story Alan describes how he wanted to go down into a mine and the miner said sure and lowered him down in the bucket used to bring up rock from the mine.
In searching for a suitable image to attach to this sheet I found this print by Nutter Buzacott who also did illustrations to be part of the book. This piece isn�t one of them but it gives an idea of the style of work.
The piece was broken up to make two other pieces which sold.