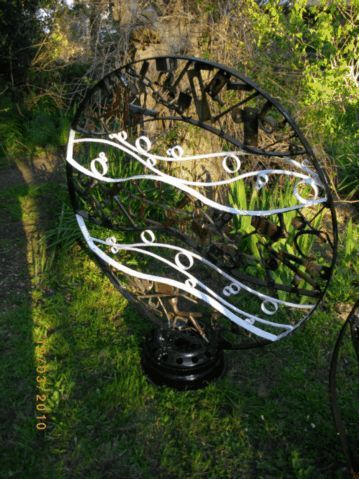 I did 5 pieces for a show in Lockhart entitled� spirit of the land.� sub-themed �Elements� I thought they would also be appropriate for this show in that the concerns of the pieces are universal.
In this piece I have used a flowing forms representing flowing air and included bubble shapes. The polluted air is represented by the darker materials and the fresh air( of which there is less) is represented by white.
I live in the Latrobe valley and there are times when a grey/brown haze drifts up from the valley or down from Melbourne. Where I live ( Jindivick) is not directly in the path but it does tend to make me aware of difference in air quality.
I used to go to college at RMIT and our course was on the 12th floor. In looking t the building across the road a subtle gradation was visible on the concrete. That closer to the street was a lot darker and that closer to the 12th floor was considerably lighter. This was in the day of lead based petrol and some change has occurred since. However, we went to China two years ago and the city we visited was enshrouded in a haze such that you were not aware of the mountains only a short distance away. In New Zealand because there is different geography you could really appreciate the air quality.