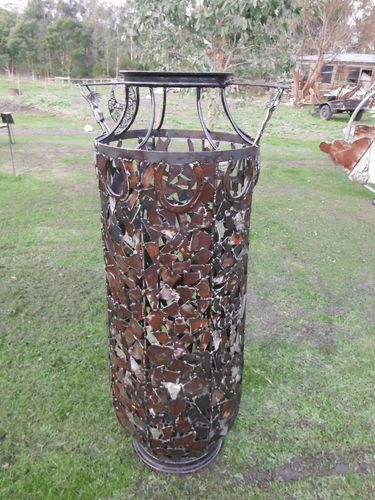 Greek and Roman Antiquity.
A large two-handled storage jar having an oval body, usually tapering to a point at the base, with a pair of handles extending from immediately below the lip to the shoulder: used chiefly for oil, wine, etc., and,set on a foot, as a commemorative vase awarded the victors in contests such as the Panathenaic games

I saw a lovely amphora shape at a friend’s place and I was wanting to try this process of using small pieces of metal like overlapping leaves. The two things coalesced and I worked on this for a week with a panel done each day. I added the two figures on the handles as in some greek art there is similar use of figures. This amphorae will not hold anything but it looks lovely if a bit bottom heavy.
It doesn’t have a specific meaning…but it did give me a chance to practice an idea I had and I used the same technique on my large self portrait.