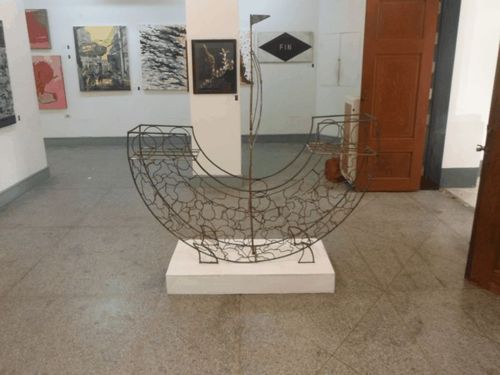 In doing this piece I wanted to do something that had some relevence and reference to this trip. I have never been to Thailand before and was interested to look at the forms and culture here. On the first day I bought a book called" 101 Thai Forms by Wijit Apichartkriengkrai"..which detailed old time and traditional practices and objects. As i went through it I jotted down ideas and on the last page was a picture of an antique boat called The Suvannabhumi( a boat for sailing to the golden land).( Australia has sometimes been called the golden land and it is not beyond the reach of imagination that ancient Thai mariners visted our coasts)
I had recently done a boat form at home but it was more based on a yacht so I did a basic sketch and decided that this would be possible in the time allowed. I also had expectations of certain materials which did not eventuate but the materials which were scrounged and captured from a range of sources proved appropriate to the task with a bit of modification to the idea.
Why a boat? Well boats symbolize a journey of discovery which is what I am on .The boat is not a pointed type boat like we have in the west but from my reading I understand many Asian countries had boats of a similar design.I was going to cover the sides with offcuts and flat material but as not much was available and some old steel bar ties were found on a building site I decided to make a pattern in some ways honoring the patternmaking of many thai art forms. As I ofeten use recycled materials in my sculptures I thought this steel tie wire( ties up bundles of steel) would be just right as many ancient boat building practices used tieing of parts of the boat as a means of construction.I specifically put in a few of the twists from the tieing process to reflect this.
Yes, I know my boat won't "float" but it seems to me to be a lovely form alive with all sorts of memories, traditions and aspects for reflection.
I often let my work rust and then coat it with a protective paint called Penetrol which stops the rust and gives a lovely finish and I feel rust on the boat will allow it to achieve a reminder of some archeological object.
I had two students(Mongkonporn Sirisopon and Mongkon Chutputcharapinyo) helping me with the construction and they played a major part in the bending of the wire, cutting it and welding different parts.
Thank you for allowing me to be part of the arts festival. It has been a delightful and rewarding experience.