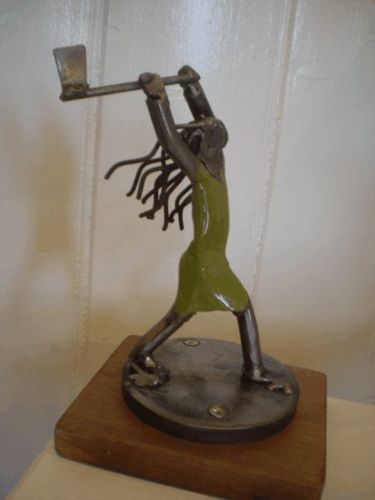 We used the original axe girl as part of the invitation so I thought I should have something similar. This also sold at opening night.I made a piece a while ago called "making some changes" which was my little axe girl. It was included in the invitation as representative of my work and it is a clear little piece. One of the papers wanted different pictures of it ( didn�t have any!) and a number of people said I really like your axe girl.
She wasn�t going to actually be in the exhibition but I had a piece entered called Green dress( at that point unmade), following the colour theme and I thought that a few people might be disappointed if axe girl was missing so here is her sister( the other one sold).