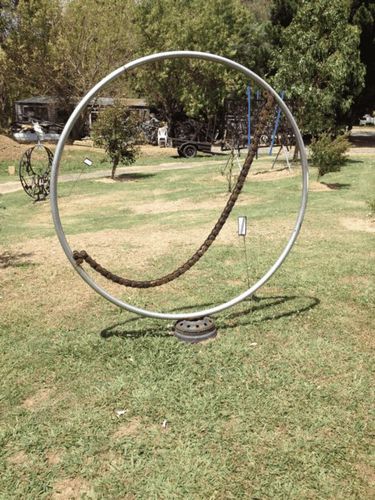 “Catenary”($400)
At one stage I did maths and started an engineering degree. Sensibly, I decided it was not for me but some terms stick in my grab bag of a memory and this is one of them.I had to look it up to check what it meant.
(The curve a hanging flexible wire or chain assumes when supported at its ends and acted upon by a uniform gravitational force. The word catenary is derived from the Latin word for "chain." In 1669, Jungius disproved Galileo's claim that the curve of a chain hanging under gravity would be a parabola (The curve is also called the alysoid and chainette. The equation was obtained by Leibniz, Huygens, and Johann Bernoulli in 1691 in response to a challenge by Jakob Bernoulli.)
All those names echo in my memory and I also love that a catenary is more or less the shape a necklace would take. As to this piece.. I am not sure if its finished yet.. I had a big circle sitting in my pile and I found this chain at the metal recyclers and the two just seemed to want to go together. Its sort of beautiful as it is…but as I have done a few abstract forms in the past and they have been unappreciated I am in two minds… I could add a star at the top and a small character climbing the chain or just leave it as it is..at present obviously it is as it is..