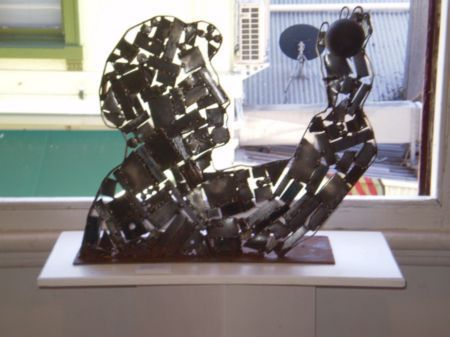 This piece was aimed at another exhibition called the �cult of personality� but I missed the due date.
I thought about who were well known personalities of the last century and I came up with Mao, Hitler and Marilyn.
The Mao figure I made out of shiny bits of junk with a rusty back propped up with sticks. I had just read the biography of Mao by Jung Chiang and figured he was a real monster whose image was not really reflective of the reality. To fit this exhibition I included a ball as a nod to ping pong diplomacy and the interaction with the west that China has had in recent years. The ball is up!