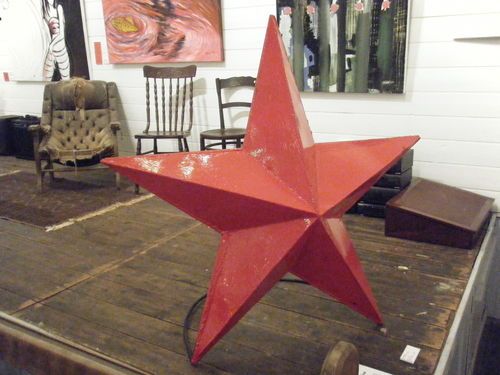 The five-pointed red star, is a symbol of communism as well as broader socialism in general. It is sometimes understood to represent the five fingers of the worker's hand, as well as the five continents. A lesser known suggestion is that the five points on the star were intended to represent the five social groups that would lead Russia to communism: the youth, the military, the industrial labourers, the agricultural workers or peasantry, and the intelligentsia. Karl Marx and Friedrich Engels used the red star as a symbol
(research from Wikipedia)
When we visited China recently one of our party bought a hat with this symbol in the middle.( He looked like Joe Stalin himself!) I wanted to use this as a comment on chinese communism in that it was all showy and shiny on the front but behind it was made of junk and rather rusty. ( I didn�t tell Hu Jin Tao that but this was a clear impression) . Hence my star is big, impressive and a great red but is propped up by a very simple and basic structure.
This also went in the Yering sculpture show and sold there