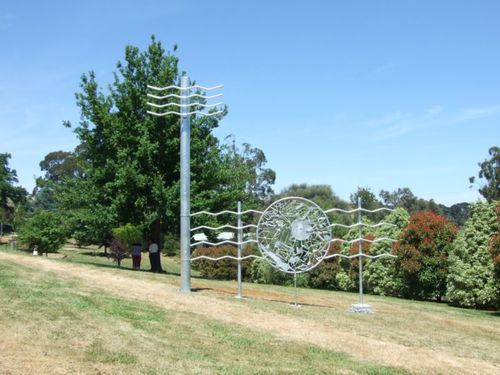 The Thorpdale Sculpture � Echo� was commissioned in 2009 by the Baw Baw Shire from Gippsland artist Laurie Collins.
The basic form is in three main parts. The 6 m tree is a reference to the world�s tallest tree which was discovered near Thorpdale in the 1800s but now no longer exists. The tree form echoes the second part of the form which refers both to the hilly surrounds and the repetitive nature of the rows for potato planting. The central circle form suggests a location in the middle of the landscape and also the completeness and embracing nature of the community.
Within the circular form is a collection of implements and symbols that echo aspects of Thorpdale�s History.
Central is the large saw blade referring to when the area was covered with tall trees and timber milling was an important part of the community. There is also a cross cut saw, an axe head and wedges used for splitting logs as well as other timber working equipment.
Another part of the collection references transport as being isolated in the hills, transport was of prime importance. There are several pieces of horse equipment and horseshoes but there are also parts of a variety of transport such as a rim from a wagon hub, car parts such as the piston and the jack and hand brake and also motor bike and bike parts. Some pieces of railway equipment such as the rail spikes and a section of rail are included which remind of the railway that connected Thorpdale to other localities for a part of its history. Also included is a variety of farming items from gate hinges, a hand held hoe and a brace for drilling, to old chains suggesting tractors and potato machinery.
There is also a device which was once part of a wall mounted telephone and also some other suggestion of domestic concerns in an old rack which could be from an ice chest or an early refrigerator as well as locks from old doors and this reminds us of the isolation for women and children growing up in the area.
One of the few specific made shapes is that of a football which reminds us that the football team is an important part of any community. There are some forms which have been includes but their uses has been forgotten and to a degree this reflects the continual march of progress. The sculpture is an echo of the past but reflects the changes in the community and also now is part of those changes with the development of the park behind.