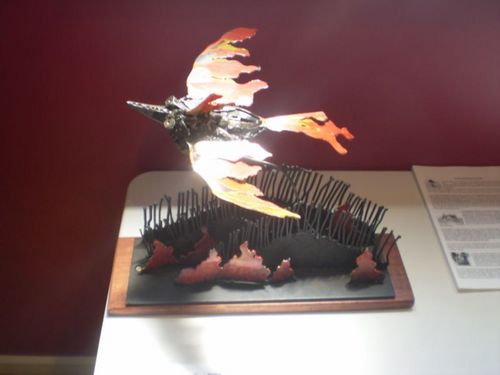 This is my second fire bird. I did the first fire bird as a response to the fires last year and the original firebird was holding a firefighter and a hose and they were fighting the fires. This was auctioned to raise funds for the fire relief. I wanted to do a firebird like a phoenix rising from the ashes. I didn�t know much about Phoenixes other than the odd bit from Harry Potter so I thought I had better do a bit of research.
A phoenix is a mythical bird with a colourful plumage and a tail of gold and scarlet. It has a 500 to 1,000 year life-cycle, near the end of which it builds itself a nest of myrrh twigs that then ignites; both nest and bird burn fiercely and are reduced to ashes, from which a new, young phoenix or phoenix egg arises, reborn anew to live again. The bird was also said to regenerate when hurt or wounded by a foe, thus being immortal and invincible � it is also said that it can heal a person with a tear from its eyes and make them temporarily immune to death. The phoenix is a symbol of fire and divinity.
( Fire bird is also the name of a cool car that existed when I was growing up)!
My firebird is rising from the burnt hills and trees that are the background to where I live in Jindivick. The piece is a bit ambiguous as it seems unsure whether the bird is causing the fire or being reborn from it. A friend who saw it said it was scary as it looked like the bird was on fire!( and so it does!) Anyway the story is there for interpretation and I quite like the overall form!