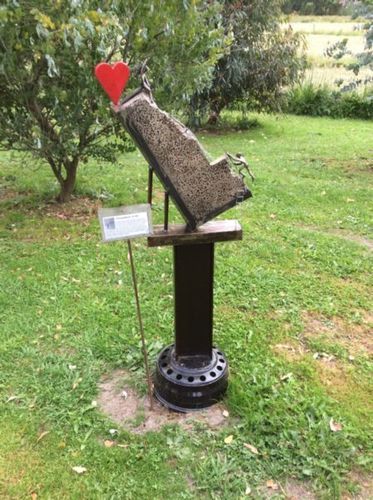 I had been passing a large concrete square outside the Robin Hood Hotel for months. It was just leaning up against the fence and seemed unloved. I could picture all kinds of uses in sculpture for it so finally I went and offered some money for it. They gave it to me and I took it home. It had a few major cracks through it ( and it was bloody heavy) so I cut it up along the breaks. This piece suggested a structure that could be placed on a pedestal. Most of the other ideas came quickly after I had the piece defined. I see it as a strong foundation for a love..and the use of concrete , I beam and reo rod, all help to give it an engineering structure ( foundation) and that even though there are some broken bits and bits to struggle through the end result( a strong love) is worth it.Won best sculpture at Tyers art show 2015.

“Foundation“ was made in 2015 from new and recycled steel  and concrete bits.