Part of the Story (Dunkeld) 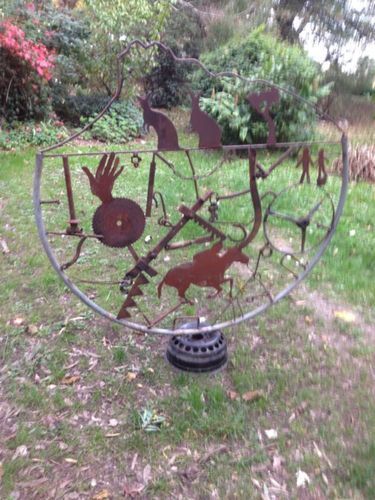 I did this piece for the Dunkeld sculpture show. I have had a bit to do with Dunkeld. When we lived at Mortlake we would go up to the Grampians to pick up redgum sleeper off-cuts for my own use and for the students I taught . I also was involved in the Mortlake Historical society and of course there were quite a few links with the discovery and settlement of the Western District. Hence my piece reflects that, with a number of common images of Dunkeld ( Mt Sturgeon) Kangaroos and racing but I have also included a number of historical woodwork tools( a chisel and a vice screw ) as well as a number of references to farming and transport as both have played a part in the continued viability of the town. There are also 2 aboriginal based images which possibly have a bit more to do with the actual Grampians than the town but it does reference the original inhabitants. The piece is called part of the story as a single sculpture cannot reference all the different aspects of the town but I do feel it matches the theme of people and place… in this case quite specifically Dunkeld.