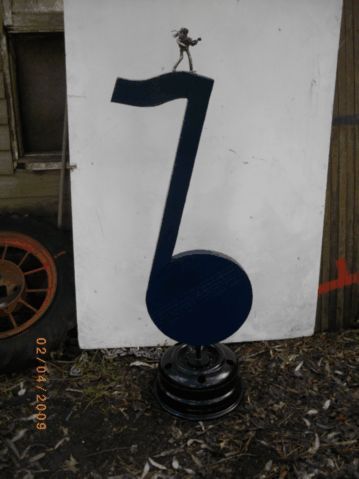 I played guitar for a number of years and to be able to play an instrument is one of the joys of life. I don�t do it much any more, but I still enjoy music in many of its forms. In thinking of this exhibition playing music seemed to be at least a part of the idea and the idea of doing a big note appealed immediately. There is a record company called Blue note so that suggested itself and if the note was going to be blue� then obviously playing the blues was appropriate. The music on the side of the note is from an old blues tune�there is not really enough of it to get a good sound but it gives the idea. My little character is modelled on any guitarist and the stance and long hair sort of is typical of the species! (Recycled)