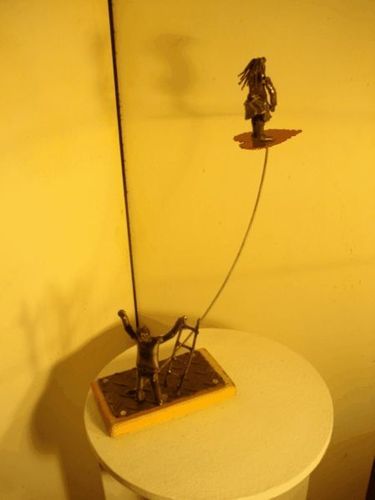 This follows in the footsteps of the up exhibition and it combines two ideas, the flying carpet and the red carpet
.
Carpets were not commonly used on the floor in European interiors until the 18th century. The term "carpet" derives from Armenian "karpet" "kar" meaning a "knot" or "stitch� The hand-knotted pile carpet probably originated near Turkey between the 3rd and 2nd millennium BC.
Magic carpets have appeared in literature from biblicaL times( Solomon�s carpet) through the present day. The popularity of One Thousand and One Nights brought magic carpets to the attention of Western audiences.
The earliest known reference to walking a red carpet in literature is in the play Agamemnon by Aeschylus, written in 458 BC. When the title character returns from Troy, he is greeted by his vengeful wife Clytemnestra who offers him a red path to walk upon:
Probably you had never even thought about where these terms had gained currency .Hence my piece follows in a very long line of representations although I tend to think others have perhaps done it more nicely!
(research from mainly Wikipedia)