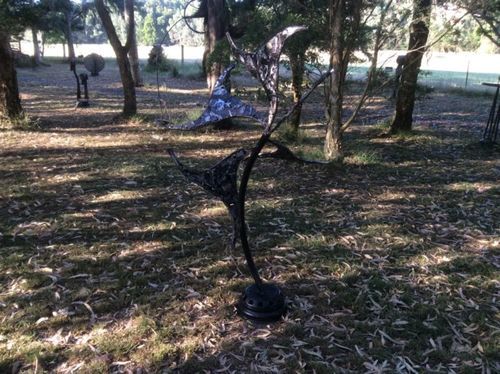 I was given a small pile of cut up balustrade at the end of 2018. The shapes were quite graceful and I explored using them in several ways. One is in this form which looks to me like a ninja star.I used to watch the Samurai when I was a kid and like everyone was amazed at ninjas and their throwing stars.

“In the past, shuriken ( Ninja stars) were typically considered to be a secondary weapon to the sword, and were not generally considered to be a killing weapon. Ninja stars were commonly used to slow down attackers or used as a distraction. There is even evidence that ninjas sometimes partially buried throwing stars in the ground as a way to maim their attackers when stepped on.

Shuriken come in many different weights, sizes and styles. In Japan, ninja stars were initially made from everyday items like nails, knives, and plates of metal, which is one of the reasons why you can find such a large variety of ninja throwing stars.

I tried a few different arrangement but this one seemed to be the a dynamic and interesting one. The covering is all odd bits of plasma cutting off cuts.