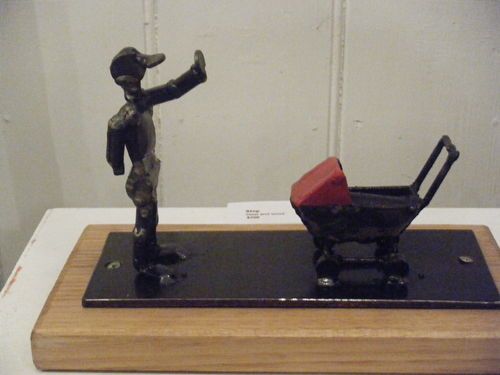 One of the nice things about making little characters is that you can arrange them in different combinations. I made the pram for a small piece called �a new direction �and this piece was set on a cut out Hitler silhouette. Really a fairly unattractive thing to have as part of your art collection ( unless you were a neo Nazi)!
Any way I separated all the bits and my policeman was from another sculpture for a show called�inspired�.
I guess we all at various times want our kids not to get any older and I thought this combination was bizarre enough and meaningful enough to make a new composition. (and of course the baby carriage cover is red which sort of steals the red used for stop from the policeman!)
I think I broke this up again and used the pieces in other things